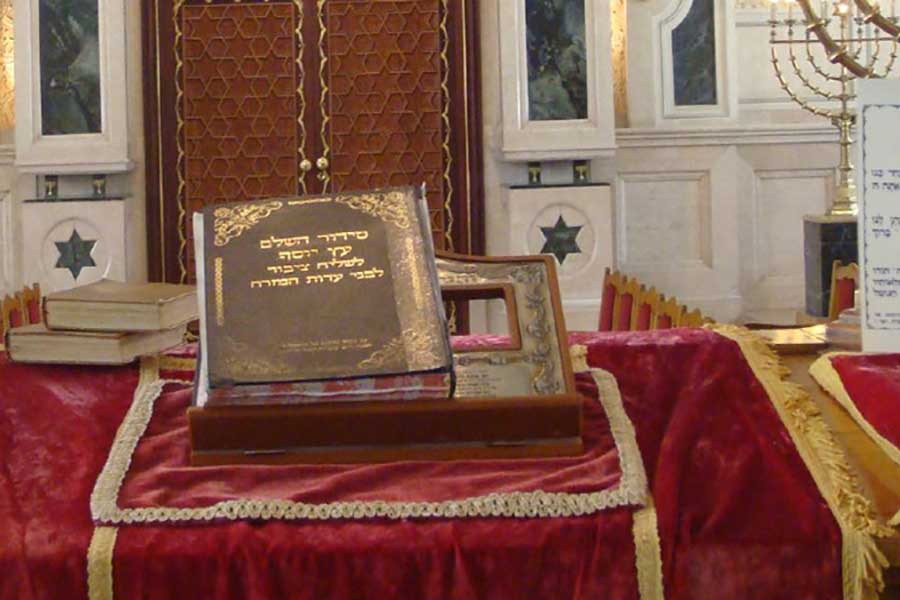 Once you arrive in Casablanca Mohammed V airport, you will find your private driver waiting for you.

Once you arrive in Casablanca Mohammed V airport, you will find your private driver waiting for you.
Our inner outing will concern the Habbous quarter, in the southern part of the city.
The quarter was established around 1920s by the French government.What is more appealing in this area is the strict pathways of its streets.Here you will uncover the French architecture touches characterizing the buildings besides the Moroccan old-fashioned design.

To do the shopping there is a wide variety of artwork depcting the Moroccan rich handicrafts .

Afterwards we will move to see the Royal Palace of Casablanca.

Another noteworthy site to pay a visit to Hassan 2nd Mosque, located in the promontory of the Atlantic ocean. It is a two-hundred and ten meter minaret which makes it the seventh largest tower all over the world.

Casablanca is known as a home town of the most massive Jewish population in Morocco and has countless parishioners, active communal institutions, and many highly recommended kosher restaurants.

Visit of the Mellah (Jewish Quarter) with its temples and synagogue services as Beth-El, Em Habanim and Neve Chalom.

The city is pinpointed on the Atlantic Ocean coastline, at Bou Regreg river passage.

During this day expedition you will learn more about the history of the city’s towers,    castles as well as its contemporary side.

In the antiquated part there is Hassan Mosque and the Almohad gates and bulwark, the only surviving part of the project for a great capital city of Almohad .

With a professional guided visit you will explore the outstanding Almohads walls of the Udayays Kasabah.

Bab Oudaïa, a majestic gate of Almohad dynasty is another characteristics of the Almohad’s impressive architecture.

Not to mention the Udayays museum before proceeding to the medina, relaxing for a while in the Moorish fashion garden.

The Mellah of Rabat is a must- see palce with its narrow footpaths and colorful yards, still gathering a few Jewish families.

After lunch time, we will move to the significant historical and tourist complex of Rabat: Hassan Tower.The mosque is located on the Wadi Bou Regreg with a hill overview.

Nearby we will see the Mausoleum of Mohammed V with a mixture decoration of stained glass windows, white marble and a cast-iron portal with a stairway leading up to a breathtaking dome.

From there to the Majestic Royal Palace distinguished by an amazing Islamic design.

Our guests are legally allowed to visit Al Mechoaur where the king led the religious feasts.

In front of the Royal palace, you find the private mosque of the king.

Its erection dates back to 1864 and is surrounded by a wall with three gates well protected access.

You will also discover the town centre which is characterized by its large avenues, ornamented with well shaped gardens. In the middle of the avenue, there is a huge construction of the Bank of Morocco and “ Musée de la Poste” and the cathedral Saint-Pierre.

You will spend the night in Rabat.

Today’s tour planning to Meknes is going to start just after your breakfast.

This imperial city was erected by Moulay Ismail four hundred years ago.

The Jewish existence in Meknes is explained the Hebraic obituary dates to the Christian epoch.

Also the Greek engraving remains as an eyewitness in local synagogues.

Here is the location of Rabbi David Benmidan mausoleum.

Synagogues shelters, some of which are still operating.

Our next scheduled visit will embrace Bab Lekhmiss which is the main pass way to El Mellah (Jewish quarter).

Afterwards, we will see the mausoleum of Moulay Ismail.

Finally we will go on travelling to Fez, where you will be cosily accommodate and pass the night.

Fez is considered as a widespread anachronism of Jewish history. That’s why Fez used to be the shelter of the most influential Talmuc scholars throughout the history, Rabbi Isaac Alfasi.

Not to mention Mellah along with the existing Synagogues.

Optionally speaking, a visit will be planned in a trip to Bhalil, a small village where Rabbi Lahou Harroch and Rabbi Raphael are burried.

Then we return to Fez for overnight stay.

After breakfast, in a very sophisticated (4×4) car your private English speaking driver will take you to Erfoud.

Before reaching the Sahara, we will drop in Ifrane which was the capital city of Jewish Kingdom in the far past days.

Its Synagogue as well as the cemetery had been a location of pilgrimage for Moroccan Jews for centuries.

We will stop in Midelt for a while before carrying on to Erfoud.

Reaching Erfoud, our driver will pick you up in a special well-adapted four wheel car to watch the sunset panorama.

There i twill be your ever opportunity to experience a campsite moment on Merzouga’s sandy hills.

A Berber dinner will be prepared for you and taken in the Sahara desert under the starry sky.

Sleeping in Saharan tents will be another charm to live.

Or you will be transferred to Erffoud to your accommodation.

This morning we recommend a an early wake up to go on a camel ride for seeing again the amazing sunrise.Then we will come back to Erfoud, the oasis town of the Sahara desert.

Thanks to its proximity to Merzouga desert village in the Erg Chebbi Dunes, Erfoud has developed tourist infrastructures such as hotels and restaurants.

We will continue to the Todra Gorges known for their impressive bare escarpments. It is a very popular area for climbers since their walls are up to 300 meters.

By visiting Dades valley, you will undoubtedly enjoy some panoramic views.

From there to Tineghir where we will pay a visit to its Mellah gateway and the od-fashioned and colorful Jewish quarter.

This marvelous city has long been an economic, commercial and social place for the population living in the area.

Kelaat Mgouna is nationally celebrated by the yearly festival of roses.

A few miles from Megouna we will visit Tiliit, known as the primitive city of the Jews of Dades .

The castle of Tiliit had been the Jewish region midpoint ruled by the Spanish-Jewish family of Perez from the end of the 15th century until the reign of Moulay Ismail in 1672.

After we suggest seeing the valley Soukora, a palm grove of 25 km², it is one of the few groves of countries still inhabited and cultivated classified as international heritage of UNESCO.

Just after having breakfast, our first stop by is going to be the two celebrated Kasabahs : Taourirt and Tifoultout.

They were considered as residences of Glaoui, the former Pacha of Marrakech.

As another must-see site in Ouarzazate is the international Atlas Studio where a lot of famous movies were successfully filmed and produced.

You can also relax by the swimming pool for the rest of the day.

Overnight stay at the hotel.

In the morning you will be driven comfortably on a full option (4x4) car towards Ait Ben hadou without missing the stop by Telouet.

We will move to Ait Benhaddou – a world Heritage village by UNISCO.

Back in the past Ait Benhadou used to be a traditional interjection of caravans linking Marrakech with the southern Sahara. Traders used to do business not only in goods but also in slaves.

About an hour drive from Ait Ben Haddou village we will stop by Telouet Kasabah.

Telouet is a kasabah all the way along the former route of the caravans from the Sahara desert through the high Atlas Mountains to Marrakech.

This monumental site is worth-visiting. Five years ago, this kasabah knew a restoration process.

Making our way across Tichka pass of the High Mountains where the submerged mountain hillsides are assembled with muddy-made houses of Berber families.

Once ending up in Marrakech, you will be transferred to your hotel where you will get your dinner and spend the night.

Just after breakfast, we will start uncovering the comeliness of this international imperial city including its most attractive memorials.

Then your local guide is going to escort you throughout the Djemma Lfna paths, the very celebrated public quarter in the south west of the medina. This area appeals to visitors of Morocco-about A million visitors a year. Here you will take pleasure from the aromatic smell of Marrakechy food .

By getting into the souks, you will find a huge number of Berber carpets, silver

The quarter became home of a flourishing community of native and Spanish Jews, known by their rabbinical schools and scholars.

As next station, we will drop in the Rabbi Hanania Hacohen cemetery, which is also the burial place of Rabbi Mordekhai Ben Attar and Rabbi Pinhas Hacohen Azough known as the “Patron of Marrakech”.

Return to the hotel and overnight stay.

Day 9 : This is your free day in Marrakech

You can feel at ease doing any wished activity as: cooking, shopping, having a traditional Turkish bath and so forth.

Transfer to Menara airport for your filght back