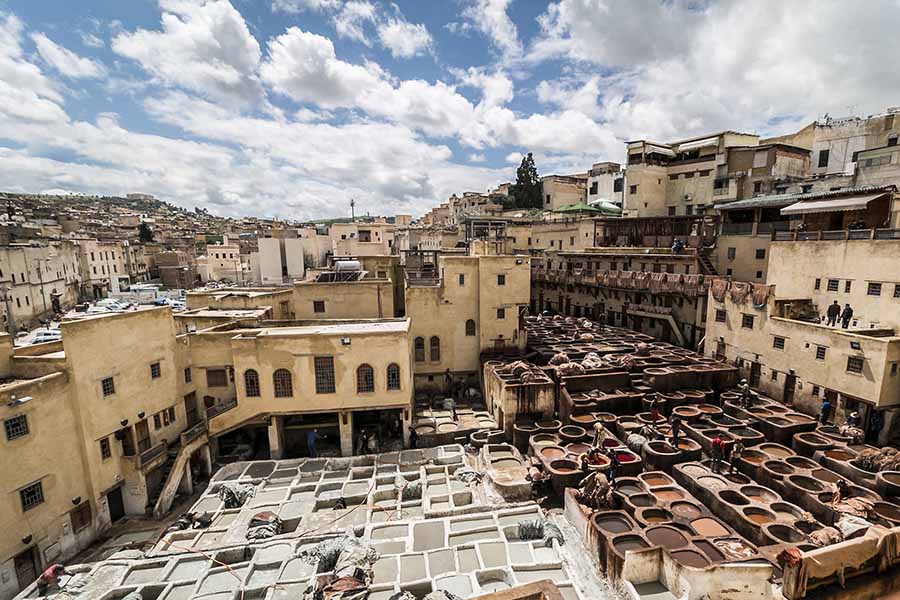 Generally speaking, This tour remains vital since it is an actual opportunity to learn more and more about the countless features making Moroccan history along with its culture and customs.

This tour is significantly typical for those who would like to live a delightful experience for a visit to   :  Rabat, Fez, Meknes , and Marrakech.

Besides, some other attitudes characterizing its handicrafts markets.

The secret lying behind their names as imperial cities is thanks to their political statue as capitals of the most powerful dynasties that commended our kingdom in its early past.

Your private driver will be waiting for you at the airport to drive you gladly in an air-conditioning car to your booked accommodation.

Hassan 2nd Mosque as the most gigantic one in all over the kingdom and Africa is going to be our starting point in Casa in case you get up a bit earlier.

This Statue is located in the headland of looking out point to the Atlantic ocean.

It is the seventh biggest mosque in the world with a tower of 210 meters.

Its minaret is 60 floors high topped by a laser light directed towards Mecca.

Next, we’ll pass by the “Parc de la Ligue Arab”: a huge garden with a various sorts of trees and plants such as ficus , arcades , pergolas and so forth.

A shift will take us to the Place Mohammed V and the celebrated “Palace des nations Unis”, a very active space of Casablanca town centre.

All long Mohammed V Palace there are blocks of constructions reflecting the French architecture.

Around the place you can enjoy a brief shopping activity.

From the north as well as the south of the Place of des nations Unis spreads several streets and avenues.

By the surrounding modern inns and hotels have been built besides some former administrations, grouping both of Hispano-Mauresque and Art Deco styles .

Throughout “Fares Royal” avenue we will head to the old medina, for a guided visit.

If we aren’t short of time, we would visit the celebrated Restaurant Rick’s café whose atmosphere looks like the famous movie CASABLANCA.

You will settle comfortably in the stately home erected against the walls of the ancient Medina.

By the end of today’s visit,You will be traveled to Rabat for the overnight.

The next morning you will enjoy a whole day familiarizing yourself with this imperial city.

Rabat city as a the capital of Morocco gathers both of ultramodern and historical aspects.

The city is located on the Atlantic Ocean coastline , at Bou Regreg bay river.

During our inner visit we will uncover not only the history of the cities’ towers and castles, but the up-to-date town as well.

Let’s start the visit to the out-of-date area including Hassan tower and the Almohad gates and rampart, the only outliving part of the great Almohad dynasty.

Your private guide will lead you to a circuit through the attractive Almohads walls of the Udayays Kasabah.

Next, you will come round Bab Oudaïa standing for a real image of Almohad martial style, a majestic gate of Almohad dynasty.

Following this, the guide will conduct you to see the Udayays museum before moving ahead to the medina .

After lunch, we go on walking to Hassan Tower and the Mohammed the fifth mosque& mausoleum which form an important historical and tourist area of Rabat.

The mosque is pinpointed on the hill overlooking the Wadi Bou Regreg.

Walk along the well-known “Rue des Consuls” where foreign consuls were once necessitated to live.

The Necropolis site “Chella” which was set up on immemorial area is another well-worth visit location.

From there to the Majestic Royal Palace where you will enjoy uncovering the eye-catching Islamic architecture.

Our guests are authorized to visit Al Mechoaur, where the king led the religious feast prayers.

In front of the Royal palace, you find the privately-owned mosque of the king.

Its erection dates back to 1864, surrounded by a wall with three gates well shielded access.

As another planned stop by, we will do a visit to the large avenues of the new town centre.

On both sides lies a series of building blocks, the huge construction of the Bank of Morocco, “Musée de la Poste” and the cathedral Saint-Pierre.

At the end of the day you will be transmitted via Fez city, on a trip that may take us 2 hours and half of driving.

in your booked accommodation you will spend the overnight.

Just after breakfast, you will start the day’s visit with your guide.

The first station is going to be the Royal Palace.

Besides, some nearby worth-visiting quarters among which Moulay Abedallah Quarter , the Mellah (Jewish Quarter).

onward you will go to see Fez el –jadid, a monumental Kasabah which was considered as a governmental centre until 1912.

moving in the direction of the southern Tower to have a look at including The “Museum of Weapons”, a fortress that is used to shelter Fez city.

From Fez el-Jadid to Fez el-Bali, marked as a sequenced blocks of rooftops with minarets and domes.

Cars can not go through its streets because of their narrowness.

The reason why merchants and porters use donkeys and mules.

Upon along with your guide, you will enter Rue Talaa Kebira, the main street leading to the old legendary medina.

Reaching the old medina, you will see the Karaouiyne mosque.

The oldish university in the world from where the greatest scholars  of the kingdom had been graduated.

Dar el-Magana is another site deserving a stop by.

It is a fourteenth century water clock.

Around the area you can see the tomb of Ahmed el Tijani in the interior of Zeouia Tijaniya.

He is the establisher of the doctrine “Tariqqa el-Tijaniya (The Way) throughout Morocco.

Following this, you will also stop by the Ech Cherabliyine Mosque (Mosque of the Slipper makers) then have a short visit to the souks presenting a great deal of products as: henna, slippers, caftans, silks, spices and jewelries.

Next, we will stop by Fondouk El Najjarine identified as a UNISCO locality.not to mention the Fez highlight Tannery.

To watch a large assortment of pottery leather-products and wood arts, we recommend visiting  the museum of Dar el-Batha .

The second overnight in Fez.

Day 4 : A day trip to the Roman city of Volubilis and Meknes.

After breakfast we’ll depart to Volubilis, then to Meknes.

Your private driver will pick you up from your hotel/guest house through a beautiful greenbelt road to find out the impressive archaeological remains of the Roman city of Volubilis.

The site was founded in the 3rd century BC, after a quick stop in panoramic view in Oulad Shaker reservoir.

The site was ultimately pinpointed as that of immemorial city of Volubilis until the end of The 19th century.

About half of the site was quarried , bringing to light fine mosaics, particularly during French colonization over Morocco.

Furthermore, some of its high-status buildings were renovated.

At the recent time this tourist resort has become a UNISCO World Heritage.

Our next station will be Meknes.

The first stop by is going to be Bab Lekhmiss, then the jewish quarter called El mellah.

Hri Souani : One of the most tempting monuments of Meknes, pinpointed about 500 m south of the Royal Palace and the place Mechouar, it dates from the time of Moulay Ismail in the early eighteenth century .

These well fed at the time as well as the building Souani basin, large water tank constituting the monument with a single entity.

It is a building composed of huge vaulted silos, built largely stores; it is covered terrace supported by huge pillars.

The well-built walls guaranteed a constant temperature that made the maintenance of food easy and fresh .

Returning to fez for the night.

Day 5 : From Fez to Marrakech, travelling across the middle Atlas.

In the morning your English speaking driver will pick you up in a very sophisticated four wheel car from your hotel or guest house to set out a fabulous journey to Marrakech.

The departure point of today’s tour is going to be from Fez via the grassland of Sais, One of the most productive plateau in the country.

On your way, you will enjoy the opulent scenery of the huge cedar forest of Ifrane/Azrou where you will see the Barbarous apes.

From there directly to BeniMellal city, situauted at the bottom of the Middle Atlas Mountains.

Now in Beni Mellal, a contemporary town surrounded by orange and olive copses.

In the 13th century Beni Mellal set on the extremity between the kingdoms of Fez and Marrakech, which were the objects of dispute between the Merinid and Almohad dynasties.

by the surrounding you will explore a variety of natural landscapes as waterfalls, caverns and wooded gorges.

A traditional lunch meal will take place around the region.

Before the sunset we will proceed to Marrakech for your first overnight.

Day 6 : A guided visit to the red city, Marrakech.

As soon as you have breakfast, a whole day expedition will start by uncovering the comeliness of this international imperial city along with its most celebrated memorials.

Firstly, we will call in the twelfth-century Koutoubia Mosque.

Located in the south west of medina quarter.

It was completely built under the reign of the Almohad Yqub Almansour.

This area appeals to visitors of Morocco-about A million visitors a year.

Here you will take pleasure from the aromatic smell of Marrakechy food.

By getting into the souks, you will find a huge number of Berber carpets, silver jewelery, artisan workshops, handmade shoes and tanneries are displayed.

Heading for the Lower Medina you will find out the extremely amazing mosque Al Mansour, the sixteenth century Saadian Tombs with its basic towers.

Besides, we will stop by El Badhi palace as well as the Mellah (the Jewish quarter).

A morning trip in a sumptuous 4×4 auto car driven by your private driver, you will set out to see Ourika Valley, a scenery situated at the lower slope of Atlas Mountain.

Due to its many waterfalls and several natural attractions, it has become a very popular day-trip destination.

Berber people are the original inhabitant of Ourika who stick to a traditional way of life.

It will be an opportunity to visit well-neat herb gardens where you can taste mint tea.

Hiking, rambling and mule riding are some of the loosening activities you could practise in the area.

Up to the head of the valley, encircled by the peaks of the High Atlas is Setti Fatma, a village which has been restored after being damaged due to severe flooding in 1995.

The village is a relatively quiet typical Berber village.

Walking around the village, there are some median-sized waterfalls to be watched.

After an entertaining day, we will be back to Marrakech for a third relaxing overnight.

Day 8 : Transfer to the airport for going back home.

After breakfast, transfer to the airport ( in Casablanca or Marrakech or any other city in Morocco) for return flight and assistance with the boarding formalities.